The Nusaybin will be the gate of trade, welfare, friendship, cultural connection and common benefit 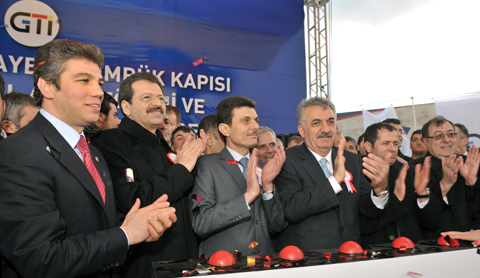 The chairman of TOBB Rıfat Hisarcıklıoğlu said “People generally supposed in the past that customs gates separate countries from each other, but thanks to the Nusaybin Customs Gate, Turkey and Syria will become closer.  The Nusaybin will be the gate of trade, welfare, friendship, cultural connection and common benefit. These gates will be beneficial for both Turkey and Syria.”  ​ ​

The groundbreaking ceremony of The Nusaybin Customs Gate, which will be modernized with the model Build-Operate-Transfer by the Union of Chambers and Commodity Exchanges of Turkey and its affiliate Customs and Tourism Enterprises Co. Inc., was realized with the participation of The Minister of State, Hayati Yazıcı, The Syrian Minister of Finance, Muhammed El Hüseyin, The President of TOBB, M. Rıfat Hisarcıklıoğlu, The President of Customs and Tourism Enterprises Co. Inc, Arif Parmaksız and the related authorities, Presidents of Chambers and Commodity Exchanges.
The President of TOBB, M. Rifat Hisarcıklıoğlu made a speech at the ceremony and said “We had realized the modernization of six customs gates with the model Build- Operate-Transfer which brings no burden to the public and which is the first instance all over the world. We feel proud and happiness.”

All countries are in competition to get more shares from the world economy. The trade volume which was 1 Trillion Dollar in 1990 increased to 16 Trillion Dollar last year. We must increase the share which we get from the cake as a region. Trade provides welfare and richness. The welfare and richness also provide people to live humanly. We have obviously seen this reality for the last 10 years.

The Turkish economy has also taken a new departure in the last term. The economy has significantly had a huge growth performance depending on private sector. Although in the last 10 years our country had two crises, one local and one global, our national income has grown totally 45 %.

As long as our economy has grown, our aims and our vision have grown. Our perspectives have changed. We have an entrepreneur capacity which does business and competes all over the world. Thanks to this, we can mention the target of being in the biggest 10 economies of the world and having an of 500 billion dollars. These targets are not far for us.

As the famous politician Hanibal said “Either you find a way or you open a way”, we have found a way; the way is to get rich via commerce. We are opening a new way on these days. We are talking that Turkey will become a transit giant and a logistic giant besides becoming an industrial giant. We plan to revitalize the historical Silk Road. These are our vision as TOBB about the modernization of The Customs Gates.”

“The customs gates will be beneficial for both Turkey and Syria”

Mr. Hisarcıklıoğlu indicated that the relations that the government has improved with the neighboring countries swiftly reflected to the economic field and the private sector become the most essential supplier of the region and Mr. Hisarcıklıoğlu added that Turkey has the biggest fleet of the Europe at road transportation. Thus, these show the significance of making the customs gates more effective and efficient, for the national economy and publicity.

Mr. Hisarcıklıoğlu added that “The Nusaybin Customs Gate which we will modernize via the model of Build- Operate- Transfer will be the second modernized customs gate in the Syria border. The data stream will be firstly provided in this customs gate, thus all the operations will be swiftly performed. We are investing to 31 Million TL for the Nusaybin new Customs Gate which is planned to be completed in this year. Thanks to this, while the gate can perform a service for 16 thousand vehicles and 200 thousand passengers at the moment, the capacity will increase 500 thousand vehicles and 2.5 million passengers annually after the modernization.
Turkey and The Middle East approach more and more by the Nusaybin Customs Gate. The annual import volumes of the countries in The Middle East are about 600 Billion Dollars. The share which we have in this volume is only 3.5 % (That is 21 Billion Dollars). We will increase our share thanks to easier transportation. On the other hand, the customs gate will be an important alternative transit to Iraq and also it will lighten the load on Habur Customs Gate. After the transition from the Nusaybin Customs Gate to Syria, the distance to The El Rabia Customs Gate between Syria and Iraq is only 76 km. This will be an advantage for both carriers and exporters.

The Nusaybin new Customs Gate plays an essential role for the development of the Southeastern Anatolia. It will bring an economic vitality to the region. Trade provides welfare and richness. The welfare and richness support peace. People generally supposed in the past that customs gates separate countries from each other, but thanks to the Nusaybin Customs Gate, Turkey and Syria will become closer.  The Nusaybin will be the gate of trade, welfare, friendship, cultural connection and common benefit.  These gates will be beneficial for both Turkey and Syrian”.

Mr. Hayati Yazıcı stated that “Turkey is an important actor everywhere in its region; Turkey provided this station with its neighbors. However, Mr. Yazıcı added the time was lost until these days. Therefore, the relations should be swiftly powered so that the lost time should be made up.”

Mr. Yazıcı underlined that Turkey renewed all its customs gates one by one within a plan in the customs field as like in every other field. Mr. Yazıcı summarized the aim of the customs that “To facilitate trade and to prevent illegal transitions”.

Mr. Yazıcı said that we take three significant contexts “Security, freedoms and to provide a basis which the customs procedures will be swiftly performed without bringing an incremental cost to traders”. Mr.Yazıcı added that this balance is always valid in our works.

Mr. Yazıcı stated that these mentioned contexts are taken into consideration while constituting the procedures being related to customs and restructuring the service units. Mr. Yazıcı said Turkey has a contemporary consideration by renewing its customs gates and has implementing process which will provide security of risk assessments by using high technologies.

Mr. Yazıcı stated that Turkey continues its works about building the common customs gate with not only Syria but also the neighboring countries in the region, Iraq, Georgia, Azerbaijan, Nakhchivan.
Mr. Yazıcı mentioned that the Nusaybin Customs Gate’s foundation was laid today, Akçakale and Karkamış’s foundations will be laid and Mr. Yazıcı said their purpose as to increase the trade volume which was 2.5 Billion Dollars according to 2010 to 5 Billion Dollars on a few years.

Mr. Yazıcı said that the customs gate is going to take into service with the ceremony preparations on September 15, 2011. Mr. Yazıcı mentioned that Turkey develops and efficiently uses its potentials for people’s peace, security and welfare. Mr. Yazıcı stated that Turkish people is hopeful about the future on condition that Turkey removes some problems with its neighbors. Traders and carriers can confidently transit from the customs gate, the government performs a risk assessment for the security and regularly collecting taxes in the framework, thus the service has a higher quality.

Syria Minister of Finance Muhammed El Hüseyin said that “The common customs gate” which is the essential project was signified and Mr. El Hüseyin emphasized that the commercial and cultural connections between both countries will be powered.

Mr. El Hüseyin underlined both vehicle and passenger’s transitions has increased at serious rate because the visa between Syria- Turkey was removed and the trade volume thanks to the performance in the last years will improve more and more in the next periods.
​